The issue for this election is not the quality of the schools, but the use of taxpayer dollars.  Measure A fails to address the areas of School Board purview that have made it necessary for the Los Gatos Saratoga Union High School District (“LGSUHSD”) to cut class offerings, reduce counseling services and increase class size.

In June 2009, the Grand Jury’s Report, Who Really Benefits From Education Dollars? (Hint: It’s Not the Students), called for eliminating the waste of many small school districts, each paying its own highly compensated administrators.  In June 2010, the Grand Jury issued Achieving School District Efficiency Through Consolation, which provided more detail about administrative waste and gave the District a roadmap to cut this waste.  On February 8, 2011, approaching two years after the first Grand Jury report, the School Board reviewed its plan to address the Grand Jury’s recommendations.  This plan consisted of a blank piece of paper.  A blank piece of paper was not surprising given the District rejected the Grand Jury’s recommendations on September 8, 2009 and August 6, 2010.

Our teachers are paid in the 99+ percentile for California teachers. This graph shows the pay distribution of 286,666 teachers reported by the State.

These data are the sum of the “average salary paid” and the health & insurance benefits.  “Average salary paid” is determined using a formula which is useful for ranking districts, as this chart does, but is not a precise measure of teacher compensation. This table is actual teacher pay:

Acalanes, the district that serves the Orinda area, was used for test score comparisons in the District’s recent mailing.  Mission San Jose, in the Fremont Unified District, had an API score of 953.  This is the wage distribution for the three districts. 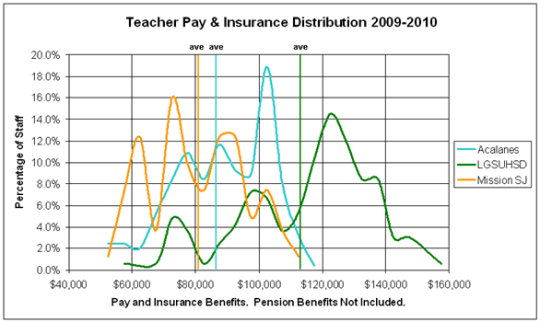 If LGSUHSD paid the same wages and benefits as Acalanes, the District would not need more taxes.  Instead, student programs are cut and new taxes proposed to support high wages and pay even more. The data show that this district pays far higher than competitive wages — less than 1% of teachers make more!

This is the 2011-2012 budget now under consideration.  What is the top priority of this budget?  PAY INCREASES!  Student programs are cut in order to increase pay.  Instead of restoring previously cut programs, pay is increased.

You will find the original on page 12 of the February 8, 2011 Board Materials.