We must maintain the excellent schools that we have in Saratoga. However, maintaining educational excellence does not require a parcel tax. After years of wage increases, SUSD now pays its teachers far above market rates. The Santa Clara County Grand Jury has twice cited SUSD for excessive administrative costs. President Obama’s Secretary of Education has pointed out many areas where taxpayer money is spent unproductively in education. Rather than raising our taxes, SUSD’s spending must be effectively managed. 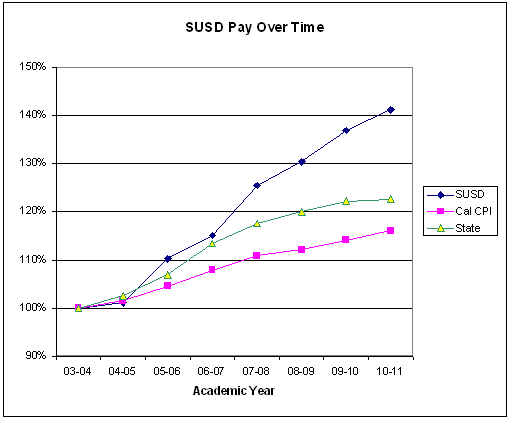 The base salary and health insurance data used to prepare this graph are posted by the state at http://www.cde.ca.gov/ds/fd/cs/. The state data excludes retirement costs. The state salary data represents scheduled salaries only and excludes salaries for summer school, bonuses for special accomplishments or payment for extra-curricular services such as coaching, drama, or music. Bonuses for master’s or doctorate degrees are included by some districts and not others. Using the state data (which excludes many elements of cash compensation and pension costs), how does SUSD compare?  Of the 271,932 teachers reported in the state’s data, only 10,812 were paid more than SUSD’s teachers. SUSD’s teachers are in the 96th percentile in pay for their profession in this state. How do SUSD’s average annual salary and medical benefits compare to other Santa Clara County elementary school districts? How do SUSD’s pay and medical benefits compare to its co-feeder schools, which are identified with an (f)? The Lakeside Joint Elementary District, the fourth feeder school, did not report its compensation to the state. According to the State of California’s Certificated Salary & Benefits 2010-2011 data:

Demonstrating a surprising lack of transparency, SUSD has not provided its compensation data to the San Jose Mercury; we do not know how much the teachers actually receive in compensation. In the table above, districts that have provided their compensation data to the San Jose Mercury are identified with an asterisk (*). If SUSD chose to disclose the actual salary data, insurance contributions and retirement costs, the electorate would be better able to evaluate the need for a parcel tax.

The Santa Clara County Civil Grand Jury issued two reports calling out administrative waste in the district. The 2009 Grand Jury Report, “Who Really Benefits from Education Dollars,” called out the excessive compensation paid to school administrators. http://www.scscourt.org/court_divisions/civil/cgj/2009/EducationDollars.pdf  The 2010 Grand Jury Report, “Achieving School District Efficiency Through Consolidation,” described the savings that could be achieved through consolidation of the local school districts. http://www.scscourt.org/court_divisions/civil/cgj/2010/SchoolDistrictConsolidation.pdf  What has the SUSD governing board done to implement the Grand Jury recommendations?

Arne Duncan, President Obama’s Secretary of Education, has observed, “Our K-12 system largely still adheres to the century-old, industrial-age factory model of education. A century ago, maybe it made sense to adopt seat-time requirements for graduation and pay teachers based on their educational credentials and seniority.…Districts currently pay about $8 billion each year to teachers because they have masters’ degrees, even though there is little evidence teachers with masters degrees improve student achievement more than other teachers–with the possible exception of teachers who earn masters in math and science.”  Falling in line with this antiquated model, SUSD’s teacher compensation system is driven by the two factors identified by the Secretary – seniority and graduate school units, a scheme commonly referred to as “step and column.”

Is the need for higher taxes the result of outside forces straining limited resources?  Or is the shortfall the result of wasteful policies implemented by the governing board?  Fiscal imprudence should not be rewarded with higher taxes, you should vote no on Measure B.